Spiš castle is a castle ruins occupying the peak of the travertine kick Spišský hradný vrch, forming the dominant of a wide area on the main road linking the eastern Slovak regions Spiš and Šariš. It is not only a proof of the development of architecture from the 12th to the 18th century in our country, but its area of ​​more than 4 hectares (41 426 m²) is one of the largest castle complexes in Slovakia.

Although it spans over the town of Spišské Podhradie, the cadastral area belongs to the village of Žehra (its local part of Hodkovec) in the district of Spišská Nová Ves in the Košice region.

The castle is a national cultural monument and since 1993, as part of the monumental ensemble of Levoča, the Spiš Castle and the monuments of the environs, is included in the UNESCO World Heritage List. Since 1990 the castle has been preserved together with the castle complex as a protected natural creation, since 1996 as the national natural monument Spišský hradný vrch. Since 2004, it is part of a protected area of ​​European importance within the European Network of Natura 2000 Protected Areas SKUEV0105 Spišské Podhradie Travertin.

The travertine kick, with an altitude of 634 m, turns off two hundred meters above the ground. Almost perpendicular walls, 20 to 40 meters high, create an inaccessible and impractical place without stone walls. The natural strategic location of the castle, as well as the adjacent slopes, predestined this place to settle and it is therefore quite natural that it was continuously inhabited almost continuously from the 5th century BC. until the 18th century castle was launched. 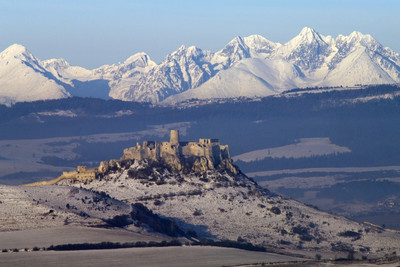 The castle is today in the state of renovated and preserved ruins. The intention of the conservators was to make the castle complex accessible to the public. Based on the long-term archaeological and architectural research and its results, the individual spaces of Spiš Castle were gradually opened in construction and exposition.

The castle complex occupies the top of Spiš Castle Hill in the east-west direction, with the terrain facing west.
The upper castle, occupying the top of the castle hill, forms the building's most preserved part of the castle. It dominates the mural of the Romanesque palace and defensive tower, as well as the murals of other residential buildings.

A medieval castle with a main gate, today provides mainly services for visitors. Presentations of the period of life, demonstrations of the work of potters, and so on.

The largest part of the castle area occupies the lower courtyard arranged as an open space with the preserved foundations of the buildings and the castle fortifications. Interesting parts include the basics of the semicircular barbacan - the pre-entrance gate in the middle courtyard, originating from the second half of the 14th century. Sometimes he played an important role in the defense of the castle, but after completing the lower courtyard his significance lost and disappeared. From the time of the Inspiration of the castle, the foundations of a separate circular building, The Intrinsic Fort, built after 1442, formerly serving as a commanding home. The fortress protected the circular stone wall and the perimeter ditch through which the wooden bridge was led. 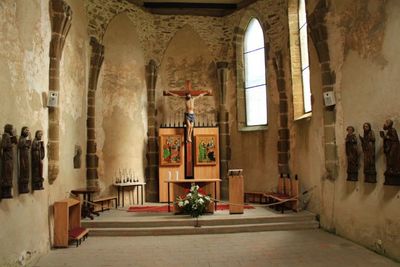 At the end of the arcade corridor, on the right, it enters the Gothic chapel of holy Elizabeth of Uhor, dating from the thirties of the 15th century.

The chapel was built in two phases. Its origin was probably related to the construction of Spiš Castle in the years 1430 - 1437. It was first flattened, probably a cassette ceiling. The concretion in the form of stone ribs, which simultaneously concludes the construction work on the chapel, was realized later, probably in the second half of the 15th century, behind the new owners of the castle - Imrich and Štefan Zápoľskovcov; it is supposed to be a network vault.

The original one-storey area of ​​the castle chapel with emporus, serving for the private piety of the castle estate, with entrance to the west side, changed its function in the 17th century into a burial chapel. A crypt was excavated into the floor, overlaid by the still-preserved sandstone plate. On the south side of the chapel there was a sacristy of the first half of the 17th century. Probably in this adaptation the exterior of the chapel was decorated with sgraffito decoration.

In 1638 an inventory of the furnishings of castle interiors was carried out, according to which there were five altars in the chapel, six paintings, twelve woodcuts and fourteen paintings on the canvas.

In the framework of the restoration of the monument, the chapel was sunk and partially reconstructed the system of vault supports. Inside the interior there are exhibits of sacral nature, while the chapel also serves its original, spiritual purpose. 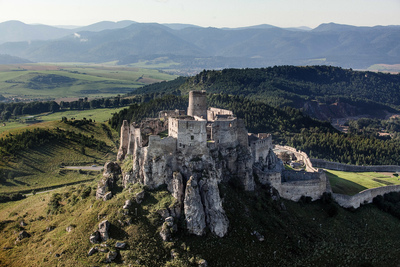 Spiš Castle is an indispensable and permanent part of the cultural heritage of Slovakia. Its significance far exceeded the boundaries of the region and the whole country. It has become a sought-after tourist destination, as witnessed by an increasing number of its visitors every year. The attraction of the castle multiplies the proximity of other important monuments (the Church of the Holy Spirit in the nearby Žehre, a set of historical monuments in Levoča and Spišská Nová Ves, St. Martin's Cathedral in Spišská Kapituľa, several mansions in the surrounding villages and others). The castle is a simple access directly from the main road Poprad - Prešov.