The Oravská priehrada water reservoir is part of the Orava water works (part of the reservoir Tvrdošín), built on the confluence of White and Black Orava. It is located in the north of Slovakia, in the same region. The dam with its shores and islands is one of the most important localities of the occurrence of water birds in Slovakia. It is situated on the migratory route of water and live birds in a cross-border position near the border with Poland. There is a possibility to sail through ship ORAVA or ship Sanica. 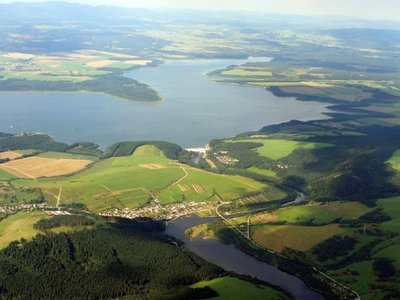 The Orava basin, in which the villages of Slanica, Ľavkovo, Ústie, Osada and Oravské Hámre lived, was already deforested during the Valach colonization in the 16th century, and during violent leakage, a strong stream of water in the Orava River threatened human settlements and fields. In order to use this unbridled element, several projects have been developed to build a dam. The first one arose in the times of Hungary in 1870, when a study and a project of a ferro-concrete dam on Orave was made. Another dam project was developed during the First World War. In the period of the First Republic, it was included in the water management plan of the river Váh. After the Second World War, the first extensive geological survey was carried out in the area. Experts recommended building a dyke, but the Ministry of Public Works in Prague rejected the lack of experience.

The first excavation of the foundations took place on October 11, 1941. However, construction works did not continue, as a number of problems arose in connection with the discovery of the mineral water that crumbled the concrete. Other problems have been associated with a breakdown in the subsoil, filled with soft clay, unbearable soil. Subsequently, the project was reprocessed and a new project from 1943 started with concrete piling. Despite all the difficulties, the construction of the waterworks was completed and the first turbine was launched on May 2, 1953. The completion of the construction work continued until 1954. 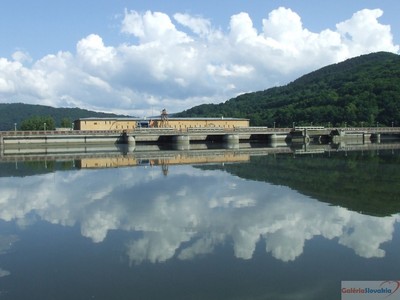 Oravská priehrada is one of the favorite tourist resorts. Every year thousands of tourists come here. In summer, tourists are the most sought after south and west of the dam. In the winter months, during periods of heavy frost, not only domestic use is used to develop winter sports and to walk on a frozen water surface.

On its shores there are several recreational areas with opportunities for swimming, yachting, water biking, boating, windsurfing, other water sports and attractions. Accommodation provides accommodations in Námestovo or several hotels, plenty of cottages and places to camping in close proximity to the banks of the dam. Sightseeing boats are organized around the island in the summer. The most important recreational centers are Slanická Osada, Harbor, Studnička and beaches at Námestovo.

The Slanic Island of Art, which is the remains of the flooded village of Slanica, houses the Slanic Roman Catholic Church of the Uprising of the Holy Cross built in the 18th century and the lapidarium. At present, a permanent exhibition of oravan folk art, sculpture and painting is installed in the church and occasional gala concerts are organized there.

For fishermen, the reservoir offers a variety of freshwater fishing, especially diving, carp, siphons and muffins, but there are also catfish or catfish. In the mouth of the River Orava is a favorite hunting of jalove. 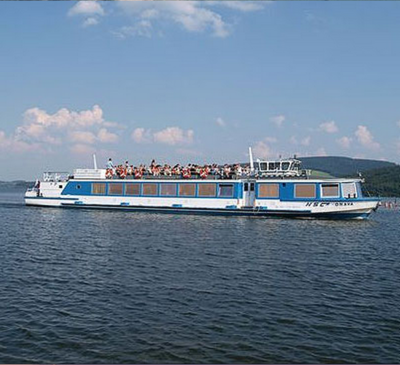 Possibility of unique cruise and sightseeing trips to Oravská priehrada by comfortable boat MP-ORAVA with a capacity of 162 persons from 1st May to October, which is located in Prístave č.1 under the hotel Goral, GPS: S 49.38443, V 19.53645

On the boat there is a buffet with refreshments, toilets and the entire voyage, the beauty of the Oravská Dam with a beautiful view of the surrounding mountains, the Western Tatras, the Babia Mountain + a sightseeing tour of the Slanic Island of Art.

Offer of school trips, corporate events, excursions for pensioners, where it is possible to order food and snacks, folk music, and so on. 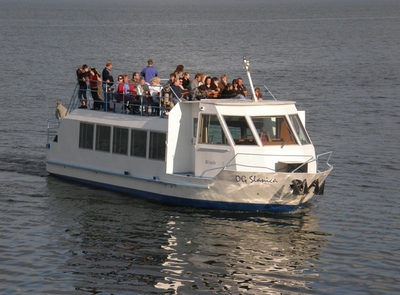 A 90-minute cruise along the Oravská priehrada is a 30-minute stop connected with a sightseeing tour of the unique Slanic Island of Art. The ship runs daily during the season from May 15 to September 15 from port no. 2 - SLANICKÁ OSADA (part Námestovo) opposite Hotel Slanica.

Only using the services of OG SLANICA is included in the price of the sightseeing boat cruise and entrance to expositions on the island.

Admission: Ship ticket and exposition on the island: