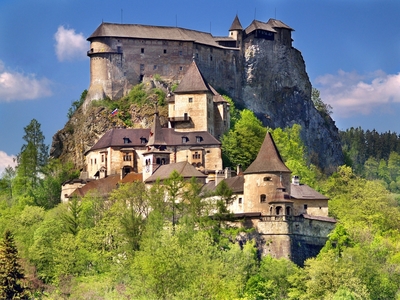 Orava Castle is one of the most beautiful castles in Slovakia, located in the village of Oravský Podzámok. It is a distinct dominant of the Orvian region, it is one of the most important monuments of castle architecture on the territory of Slovakia. The castle is open to the public daily from May to March.

The castle ridge was already inhabited.

In the middle of the 13th century, a brick castle was built on the site of a wooden castle, first mentioned in writing in 1267 when King Belo IV. took over from Mika Balaša in exchange for Žilina, Varín and Sučany and became royal property. In 1298 the castle belonged to the territory of Matúš Čáč Trenčianskeho, after which he entered the hands of magistrate Donča, in the 14th century the ruler Karol Roberta, later other important noblemen, for example Comorian Count Leopold, Ctibor of Ctiborice and others. Since 1441, the castle of Peter Komorovsky, who defended him not only against the Hussite, was the castellan of the castle, but after a good policy and negotiation he eventually became a bathrobe of Orava, which was also reflected in the repair and fortification of the castle. In the 15th century, the castle became the property of the monarch Matej Korvin, who took several measures for the safety of the castle and the area of ​​Orava itself. In 1534, the castle was awarded the rank of Ján Ján from Dubovec. After his death, Václav Sedlnický managed the castle, since 1556 Franz I. Turzo, who bought it for 18,338 golden long-term rent, until the royal court did not return the expenses incurred. Later, the castle was owned by his son Juraj VII. Turzo, who in 1606 acquired him in the lasting and hereditary property of the sword and the sling. Juraj Turzo had one son Imrich and 7 daughters. 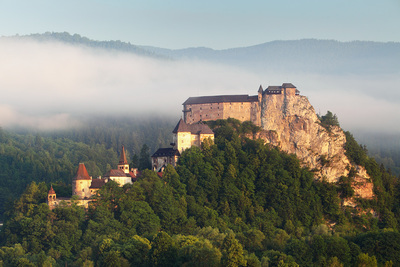 The death of Imrich Turz died out by the sword. Since Juraj Turzo did not want his estates to be separated, after the death of a single male descendant, he set the principle of the indivisibility of the property, only the proceeds of them. In 1626 there were seven daughters of Juraj Turz at the Lietava Castle and the so-called " Oravský komposesorát - co-ownership (Oravské hradné panstvo), which had always been elected one composesor - the director who managed these estates. Between 1556 and 1621 the Turzians gradually rebuilt and fortified the castle.

The castle was built in the strategically important place of the Hungarian-Polish route (formerly an important amber road) near the Tvrdošín customs station and since 1370 it was also a castle castle. The complex of the upper, middle and lower castle buildings, occupying the three height terraces of the castle rock, were built gradually from the middle of the 13th to the beginning of the 17th century. The oldest part was the palace on the upper castle secured by fortification in the area of ​​today's middle castle. Large building modifications came at the end of the 15th and early 16th century when they built a residential palace in the middle castle, reinforced by the circular bastions. At the same time, they built and strengthened the fortification in the lower castle premises. 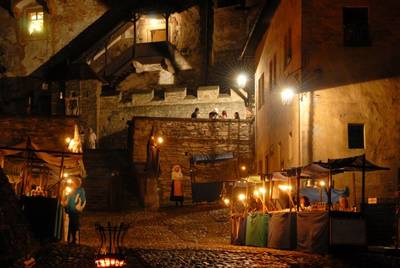 Another construction activity was restored in the second half of the 16th century by Turzovci reconstruction of the broken upper castle and construction of so- The Turz palace, built to the western bastion of the middle castle. As a result of their construction activity at the beginning of the 17th century, the construction of the palace and the reconstruction of the fortifications in the lower castle gave the whole castle complex its present form. The castle was dominated by a busy military and social life, especially in the Middle Ages, when it was owned by Peter Komorovsky and Ján Korvín, but also by Turzovcov (1550 - 1621), after the extinction of which (1621) Oravan composesorate. At the time of the Estonian riots in the second half of the 17th century, it was time for him in 1672 to become a sedentary insurgent under the leadership of Gašpar Pik. During the uprising of Franz II. Rákoci's castle in 1703 conquered the rebels under the command of Alexander Károly.

In 1800, a fire broke out in the castle, probably sparking a spark from the chimney, lighting up the roof, and from there a fire spread across the castle. Partial rescue work was carried out by František Zič and between 1906 and 1912 restored the middle part of Jozef Pálfi. Repair and reconstruction work was done at the castle at the turn of the 19th and 20th centuries. During World War II, the German military castle used it as an artillery observer. After the Soviet artillery firing on the building was fired from the katususha rocket launcher, the Germans decided they would not risk damaging the monument and from the castle grounds were withdrawn. However, the reconstruction of the whole castle was not until 1953 - 1968 (K. Chudomelka and K. Chudomelková, Stavoprojekt Bratislava, 1955), after which it became a dignified seat of the Orava Museum.