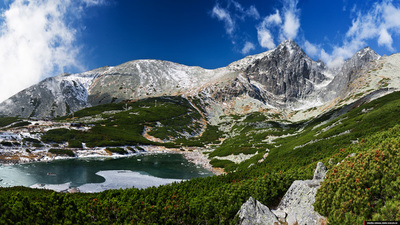 The High Tatras are the highest mountain ranges in Slovakia and Poland and are the only mountain in these alpine-style states. They are the geomorphological part of the Eastern Tatras west of Kopský sad, which separates them from Belianske Tatras. In the south, it borders the Podtatran valley. They have an area of ​​341 km² (260 km² in Slovakia and 81 km² in Poland).

From the south, the mountain is bordered by the Podtatran basin, on the north it is neighboring Spišská Magura and the western border forms the Kôpova valley separating the High Tatras from the Western Tatras. In the east, they are bordered by the Belianske Tatry Massif. Belianske Tatras are lower than the High Tatras (area 64 km², ridge length 14 km, highest peak is Havran with a height of 2 151.5 m above sea level.

Tatra Mountains are a mountain range. The geological structure of the High Tatras is complicated. It is divided into three parts. The crystalline core, which forms the main part of the ridge and the southern slopes. It consists predominantly of granitoids and crystalline syllables. On the crystalline are the alluvial sediments called " packaging, mainly cremans, limestones, dolomites and clay slate. Crystalline and its packaging form a geological unit called tatrikum. 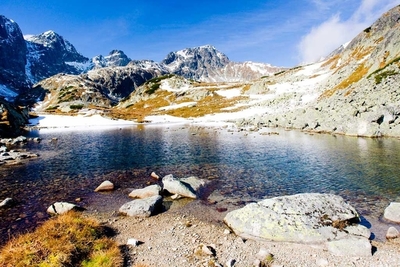 The core of the Tatier originated in the Palaeos (Carbon, 210 million years). Around the sea, the dock descended in the forefront and massive erosion began to appear. However, the triad rose again and depositions (limestones, etc.), which formed the basis of the Belianske Tatras and the Red Mountains, began to be deposited. At the end of the Chrysan period, the Tatras became part of the mainland. During this period, they were modeled by Alpine wrinkles, which manifested themselves at the end of the chalk by moving the subtatranic scrolls. In the Paleogene, the mountain ranges overgrown the sediments of the undertown group. The massive ridge of the mountain range began at the end of the Paleogene and especially in the Miocene. For terrain modeling in the Tatras, the main influence of alpine glaciers, which melted during the ice ages, during which glaciers reached the northern sides of the mountains up to 14 km.

The longest and deepest cave in the Tatras is Jaskinia Wielka Śnieżna (22 km long, 824 m deep).

The main ridge of the High Tatras, which is bent to the south by its horseshoe, is 26 km long and its maximum width is 17 km. The High Tatras stretch from the Lali Saddle (1,947 m) to the west to the Koksky saddle (1,749 m) in the east. Their most western peak is Svinica (2,301 m), the easiest lamb shield (2,229 m). The ridge almost does not fall below 2000 m and its highest peak is the Ice Shield (2 627 m). It turns five of its main spins to the south with its peaks (Kriváň, Končistá, Gerlachovský štít, Slavkovský štít, Lomnický štít), four to the north (Kozi Wierch, Opalony Wierch, Malá Rysa, Veľká Javorová veža). The highest peak of the Gerlach Shield is at the same time the highest peak not only of Tatier, but of the entire Carpathians.

In the High Tatras, we find 29 peaks exceeding 2,500 meters. 10 peaks with a height of over 2000 m in the High Tatras are tourists accessible on marked paths with seasonal closures from 1 November to 15 June. On the other hand, peaks Gerlachovský peak, Vysoká, Ganek, Bradavica, Prostřední špička, Ľadový štít, Baranie horn, Lomnický štít, Kežmarský štít and others are available for tourists only in the accompaniment of a mountain leader. For mountaineers with the required license, climbing in most of the national park territory is allowed at their own risk.